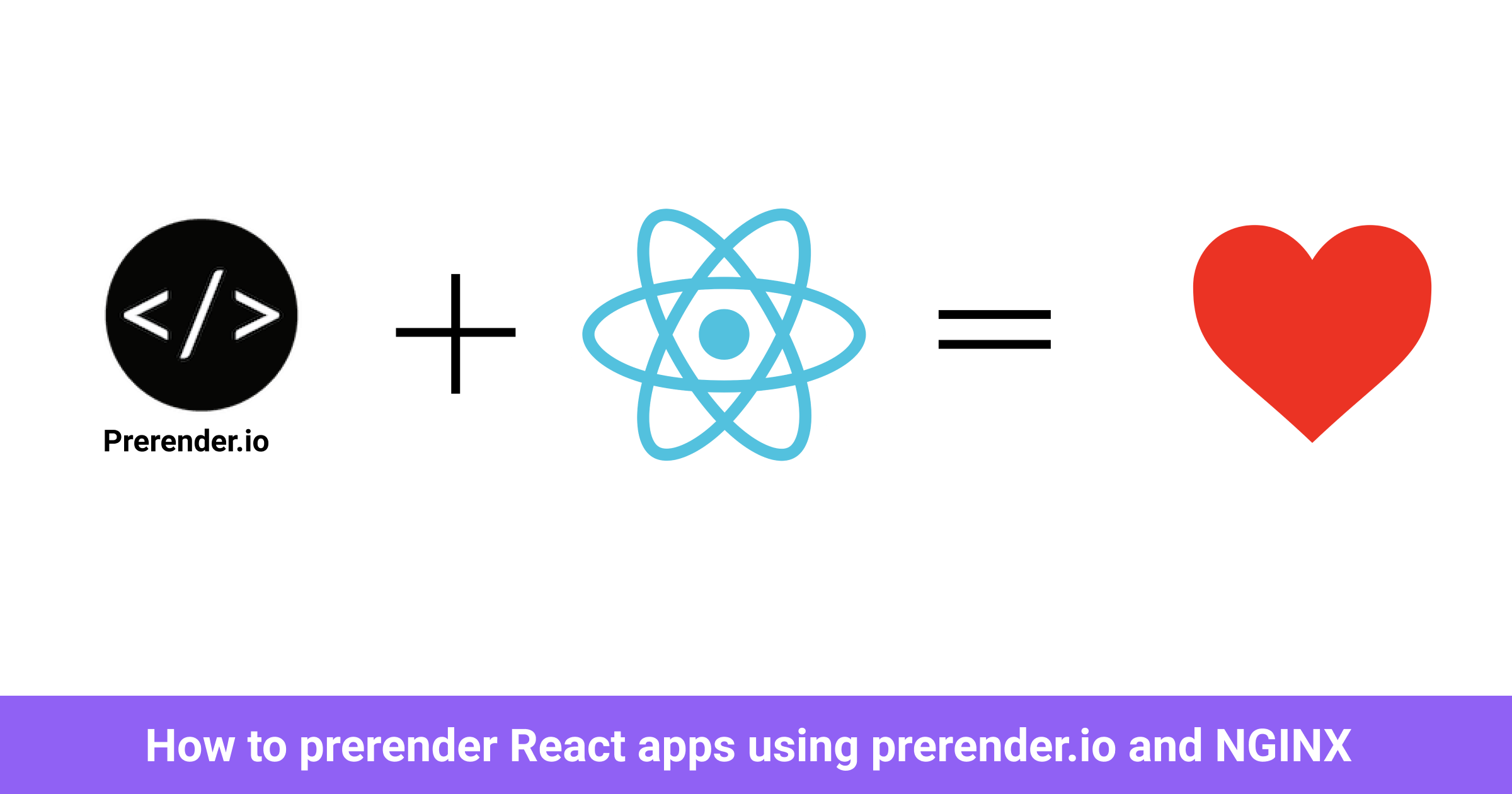 Hi everyone! 👋 I have been working on a sports analytics startup and the whole front-end is made using React. I haven’t had to work on such a big React project before this and so it brought along some unique challenges. In the past, SEO hasn’t been a big issue for the web projects I have worked on. I could always just add relevant data to the meta tags, define the navigation using semantic HTML tags and Google would show the website correctly on its result pages. However, this time, the whole website was being generated using client-side Javascript. On initial load, there is close to nothing on the web page and the navigation becomes available only when JavaScript is executed.

Even though Google crawler can execute Javascript, it is a better SEO practice to serve it a rendered application instead of relying on it to render the application on its own. Moreover, if the rendering takes longer than some set time, the crawler would simply move on. In this article, I will show you how to get the prerender service up and running on your server and serve it via NGINX to different bots and boost your SEO.

Looking for a solution

I searched around and found multiple solutions to this problem. Certain node scripts could be run as a post-processing step and they would output a rendered React app. I tried using them but none worked flawlessly without requiring me to tweak the app code significantly. It is easier to incorporate such tools at the start of a project. Adding them later just leads to a lot of pain. I was looking for a plug-and-play solution so I kept looking.

I soon came across prerender. This service acts as a middleware between your application and the end-user. It uses Headless Chrome to render HTML. If the end-user is a human, the server will return HTML + JS and the React code will be rendered on the client-side. However, if the end-user is a bot then the server will send the HTML + JS to the prerender service and return the rendered static HTML page to the bot. There are multiple similar services. I could have just as easily used renderton but prerender just seemed more popular so I went ahead with that.

Note: It goes without saying that this might not be the most efficient solution but it works for my use case. Your mileage may vary so try at your own risk 😄

This is how a typical flow with the prerender service looks like:

The prerender service will cache the static HTML for a while before requesting a new copy from the server. This method did not require me to change anything on my React app and only required me to make some adjustments to the NGINX server configuration.

This is how my application was being served before prerender came into the mix:

After adding prerender, the flow looked something like this:

There are two ways you can make use of the prerender service. You can either make use of the paid hosted service (contains a free plan as well) or you can run the open source service on your server and interface with that. I decided to opt for the latter. The first step was to install prerender on the server. It was fairly straightforward to do so using npm:

The next step was to create a new node script that ran the service. These 3 lines are enough to get the service up and running:

Save this code to a server.js file and run it using node:

At this point you can go ahead and test whether the prerender service is working correctly or not by opening http://localhost:3000/render/?url=https://google.com/. This should display the Google homepage. If the images don’t show up correctly, don’t worry. The issue will be fixed when we serve the prerender service via NGINX.

The next step is to run prerender on system start and make sure it keeps running in case of crash or system restart. We will make this happen by creating a systemd service file. I am assuming that you saved the server.js file in your home folder. My home folder is yasoob but yours might be different so make sure you edit the WorkingDirectory path. Create a prerender.service file in /etc/systemd/system folder with the following contents:

In this file, we are telling systemd to start server.js when the network is up and running. The service would launch under the user yasoob and the command it needs to run is /usr/bin/node server.js. The script would also automatically restart in case of a crash or system restart.

After saving this file, let’s make sure systemd can recognize it:

Perfect! Now let’s start the service and then check the status:

The original NGINX configuration file for my React app looked like this:

This is a fairly generic configuration file. We add some cache headers to certain path responses and pass the /api route traffic to the gunicorn server running on port 5000. Now we just need to make sure that all requests made by a bot are responded to by the prerender service that is running on port 3000. The template file for these changes is conveniently provided by the prerender folks. I took the same file and tweaked it a bit to make it work for my setup. The major thing I changed in the template was to edit the prerender service URL and remove the proxy header part. As I am using a self-hosted service, I replaced service.prerender.io with 127.0.0.1:3000 and because this is our service, we don’t need to pass any authentication headers.

I removed the SSL support and redirection from this configuration file for the sake of simplicity.

In order to test whether our NGINX config changes did not break anything, we can run:

If everything seems correct, we can restart NGINX:

To test whether our service is working the way it is supposed to, we can run the following CURL command:

Replace example.com with your React-based app URL and see if the output of this command is different from if you run curl without -A googlebot.

If you have reached this step then chances are that your prerender service is working fine. In case there are errors, please write about them in the comments below and I will try to help.

You all have a wonderful day and a fulfilling new year :)

I really liked your blog and especially the JWT react auth article. Very insightful. I would recommend and expand of those things when it comes to authentication such as rate limits, IP hits, geo location and other aspects.